The Bike:
I'm a big fan of Otis Guy. He's one of mountain biking's early pioneers, humble and a wealth of knowledge. While other NorCal luminaries tend to get more of the spotlight, Otis built fine handmade mountain bikes and (unofficially) the fastest man down Repack.  The story goes that a dog jumped across the trail at the end of his downhill causing him to scrub speed on a run that would have eclipsed Gary Fisher's top time (conveniently CK wasn't there the day Gary got that top time...).  One thing he was not, was prolific as a builder.  He just didn't build many bikes. Sadly, a lot of his later work fell victim to the dreaded Beamer platform!  Needless to say, finding an early 90's double diamond Otis Guy frame with roller cam mounts is something very special to me.

The story on this frame is that it came out of a VeloSwap SF nearly a decade ago. Scored by a friend of mine who tragically pillaged it for parts, gave it the worst PC job ever, and sold it. Went to Australia for a number of years before going back on the auction block. I remember losing that auction. As it were, it went to another buddy who is local to me who also sat on it for a number of years. When he decided to punt on the project as well, I finally got my hands on this brutally neglected Otis Guy.

The frame was riddled with pin sized dimples and dings. There was a pin hole. The PC job was so shoddy, they didn't even bother to remove the plastic cable guide. Overall, this thing was questionable at best. Clearly it was worth spending the time and money to restore.
I took it to my trusted local frame builder Dale Saso for the once over. He extended the steerer on the extra FB'ed OG fork to match the original RC mount Koski. Dale did a slight realignment to the frame, filled some of the larger dings, filled the pin hole, chased all the threads (cable guide, rear der, bb). He checked for rust and any structural issues and it was given a clean bill of health, though a lot of the pin dimples remained.

When I'd pulled the cable guide off, the original color was underneath...which happened to be one of my favorite colors. Dark green!
My buddy Hollister and I took a trip up to Maas Bros to pick out paint for a number of projects. I probably spent close to 20 mins trying to match the original green. It was pretty hard to get it just right and in the end, the color was a deviation from an exact match, but still decently close. At first I wasn't totally thrilled with it, but it grew on me. I'd originally wanted black decals with the white outline, but Otis Guy offered to send me a complete set of decals with what he had left...which was gold. It was free and from Otis, we don't complain about these things. As it turns out, this complemented the frame and really brought out the green in a cool way. Those water transfer decals are a bitch though. So fragile.

Had most of the parts on hand. Paid the most I ever have for a clean black WTB Toggle Cam. Hollister built the wheelset. Got hung up on needing a brake booster, which gave me time to get dumb and buy a bunch of titanium bolts. Minor changes here and there. Slowly hanging parts, trimming housing, dialing in brakes/gears. The end result was so far above my expectations visually. It is a subtle, classic, early mountain bike through and through. 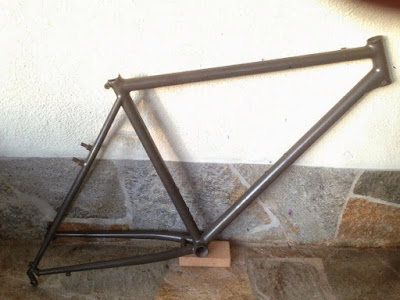 Back from a check up. 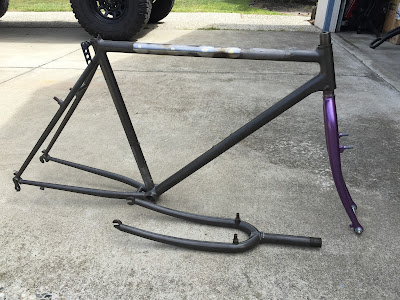 No need to remove that plastic cable guide before power coating. 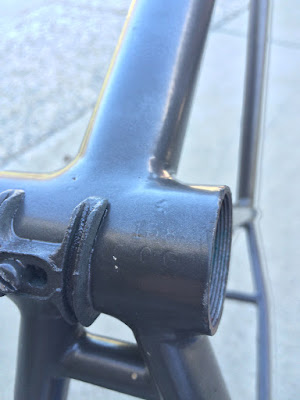 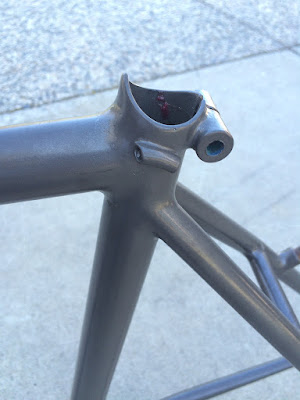 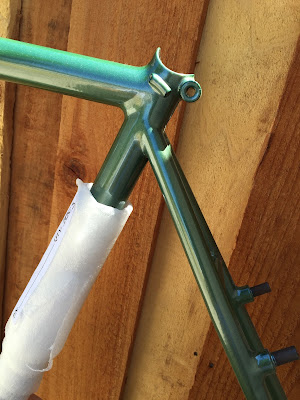 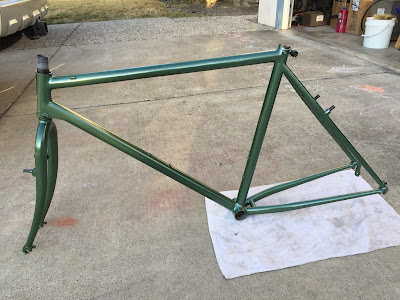 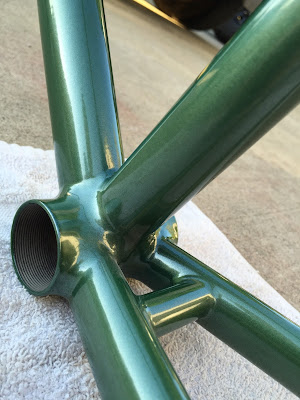 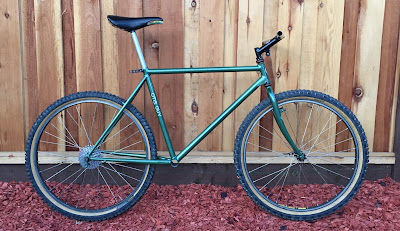 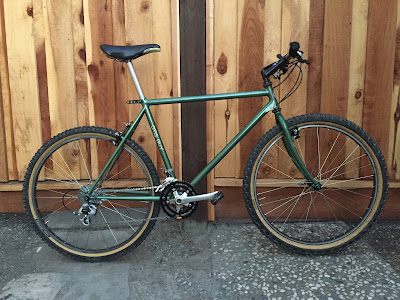 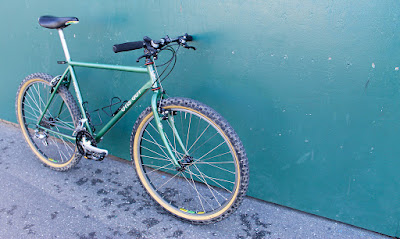 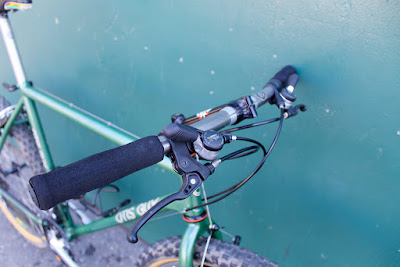 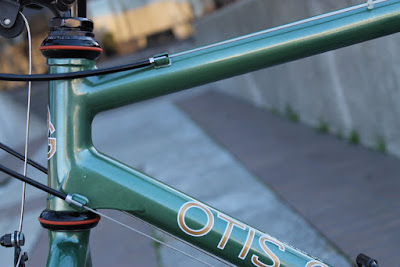 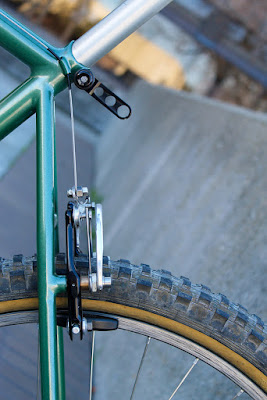 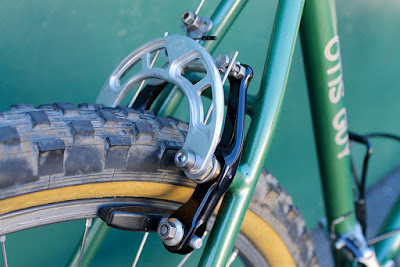 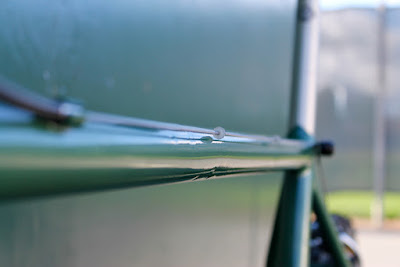 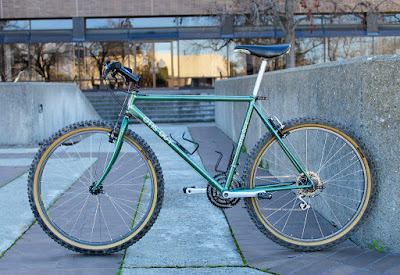 The Ride:
I tried not to have high expectations for this bike, but I like my 85 Otis Guy so much, it was hard not to have elevated hopes. The formula was there. It was done right. All reliable, usable, tried and true parts. My first ride was pleasant with open fast single track and bombing fast fire road. No issues.  My second ride, however, resulted in disaster.  The old tires shifted under hard braking and ripped a valve stem.  The tube gave loose on a open straight away where I was at about 20mph. I was thrown to the ground shoulder first.  The result was a Grade 3/borderline Grade 4 AC joint separation, a long 2 mile walk back to the truck, a challenging load up and trip to the ER, followed by 5 months off the bike.
Fast forward to after my injury healed, I ventured out on the bike again with short, conservative rides.  One that ended up with triple flats and another of shame.  I swapped to brand new tires and ventured back to the place where I'd separated my shoulder to conquer to earn confidence in myself and the bike back.  It was on this ride that I realized what I thought was uncertainty and poor tire choice.  The front end pushes in corners. I rode again in Santa Cruz with single track abounds and suffered the same undesirable behavior. I think the issue is a stem that's too short combined with bars with a lot of sweep.  It's a very shallow cockpit for a vintage mtb. I need to source a longer stem appropriate for the bike and make one final effort to see is this bike can live up to the bar set by my 1985 Otis Guy.  For now it hangs. 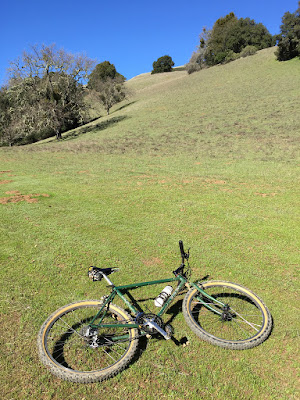 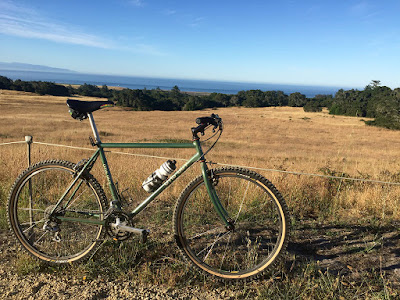 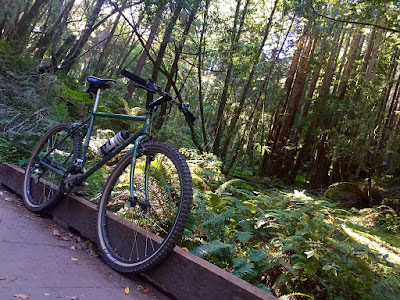 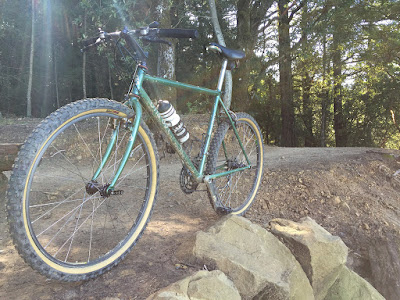